END_OF_DOCUMENT_TOKEN_TO_BE_REPLACED

So. Once upon a time (last summer) we had this idea of doing races over the internet (just like our microraces), but with real cars this time. Those small QSteers have done their job, now we need something bigger.

As Alex Axler says, "Women always get impressed with extremes. Either too big, or too small..."

We've already tried the small ones, now it's time for the big ones. On a scale of 1:1. 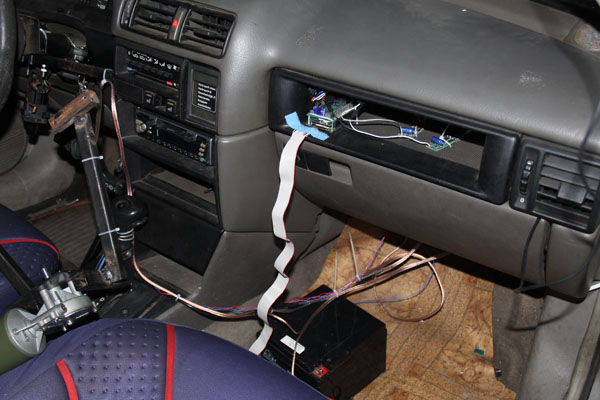 For this project I got hold of an old, dilapidated Opel Vectra, a 1990 make 2.0 automatic transmission. Nearly dead and rotten all through. With a mileage of 300 thousand km. And yet, it moves. Which is what matters.

The project was code-named "James Bond Ride", in in one episode with Pierce Brosnan he was controlling a car (an Audi, if I recall correctly) from a mobile phone.

After the first test, Roma (Domini Kane) came up with a new name - Opel Virta. As in Virt2Real and all :-) So we decided, and now the official name of the project is Opel Virta Project.

The essential point is - a real car driven by a person remotely. In the first part of "Back to the Future" Doc controlled the DeLorean with a conventional RC remote, but since we live in the 21st century, so digital rulez! We decided, for starters, to implement controlling on a tablet. There was an iPad3 laying around. How appropriate. Our controller it shall be. In case of successful tests nothing would stop us from adding a browser-based web control interface, like in the microraces. The steering board engine allows it. As long as there's enough space, but more on that later.

So, the Opel was teleported to the glorious city fo Schekino (Tula region), to Uncle Vasya's garage. For prior to connecting the electronics we had to do the mechanics. Make controls for the accelerator, steering, brake, gearshift, etc.

Not everything came out right from the first time - on the first street test everything died on us except the accelerator, it's all logged on video. So Uncle Vasya had to personally sit behind the wheel, and then I nicely drove him into the snow :-) It was hard to coordinate movements - I was accelerating on the tablet, and Uncle Vasya was steering and braking. It was fun.

There are quite a lot of such projects (remotely operated automobiles), but usually people connect to the steering rack and the brake directly. But we decided to do in a more realistic way - i.e. to turn the steering wheel and press the pedal itself (not to connect to the brains), in order to design a universal solution. Now the whole system can be moved to any car, as long as has automatic transmission. And the gear shift must be of the straight line variety, not a zigzag one.

We will add control over the internet a bit later, when it'll be warm. For it turned out to be the main problem. While we were testing outside I almost froze to death. Cold, snow is falling. The tablet's screen becomes wet instantly, and has a hard time accepting touch input. Fingers get stiff in the wind in two minutes, ending up numb and losing sensitivity. You think you pressed a button on the screen, but it doesn't happen. Plus, outside, the picture from the rearview mirror camera can barely be seen, the screen brightness is just not enough. Moreover, the windshield all covered in snow... SO no more tests in winter, I had enough with these two already.

So here's what we ended up with. Three videos of two street test trials. The first was a miserable fail, the second was somewhat better, but there was not enough action. For the action, we had already agreed with a driving school in Tula we could use their track, but during the second test a cooling system pipe burst in the Opel, so we had to postpone further tests. Until spring, I hope. Uncle Vasya will be able to fix the pipe, and when it will be warm I hope we'll take the little Opel ount into the field and get some first-class action.

Most importantly - the car is being controlled by a person through an iPad (the guy in the red jacket is me), no sensors for now. The iPad is running a self-written piece of software, there's a screenshot in the video. The iPad connects through WiFi to a Virt2Real installed in the Opel's glove compartment. The Virt2Real is running an application,self-written in NODE.JS (node rulez!), which controls all the servos. Well, it's all very simple. We also connected to the Virt2Real the digital module of a webcam (in the second test), which we attached to the rear view mirror. The image from this camera is broadcast to the iPad. That's about it for now.

The steering wheel servo is currently running at half voltage (12V), so it turns slowly. We decided to leave it this way for the first test, because it was scary driving by the garages. The brake works slowly too (takes 2 seconds to press), tis is already rejected, we'll move the actuator closer to the base, so it will press in 500 ms. The automatic gear shift and the accelerator work just fine.

UPD> On the front bumper we installed an ultrasonic distance measurement device to detect obstacles and brake the brake. But in the first launches we decided to do without it, and rightly so. For the first pile of snow would have killed the sonar. Now we are smart, we will attach it somewhere higher :-D

We also have to mark the steering wheel in black and white stripes so that we can use an encoder. Then, we can autocentre the steering wheel. In short, there is still quite a bunch of improvements to come. If the Opel doesn't die prematurely.

First testing. Be warned, there's a lot of swearing (our friend Sasha couldn't hold his emotions)

Thanks to Max, Sasha, Pasha, and of course Uncle Vasya for taking part in the tests. And helped to shoot the videos. We had six cameras, all of them were filming us. The video did not come out very nice though due to excessive shaking of the hands, since we were shooting on the move, in cold ond otherwise adverse conditions :-) But it doesn't matter. The main thing - thank you for helping to shove the Opel back into the garage after the second test :-D And a personal token of respect to Uncle Vasya for welding those motors and putting all the other mechanics together. Well done! And thanks to Sam for helping to check the Opel :-) And thanks to father for help with repairing the generator. Well, thank you all for your help.

And some more photos:

Our Virt2Real to rule them all 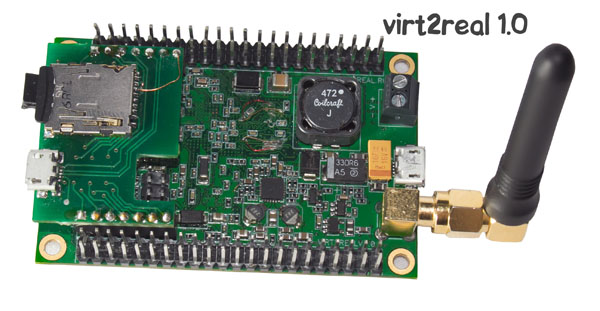 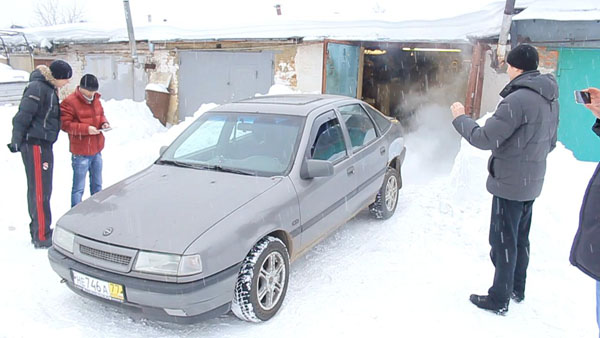 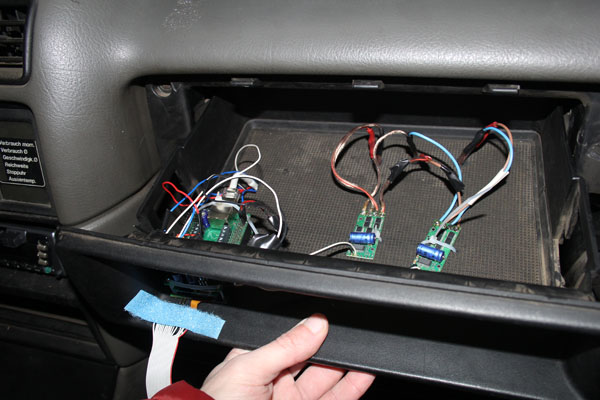 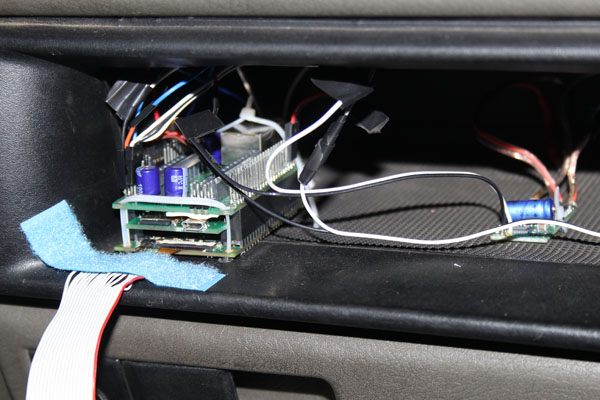 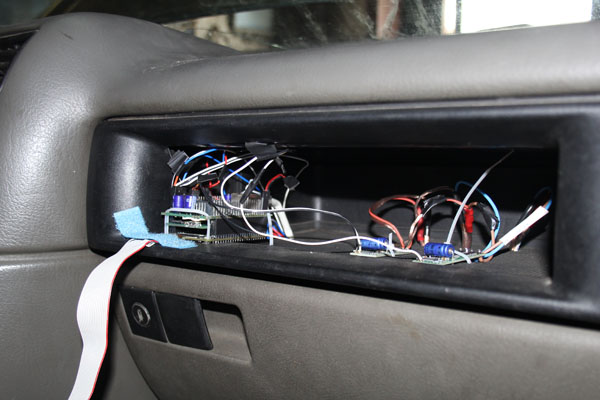 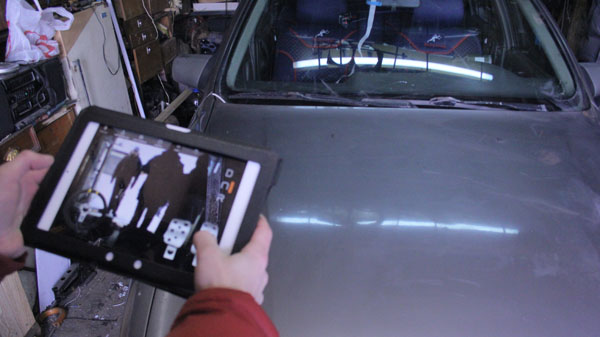 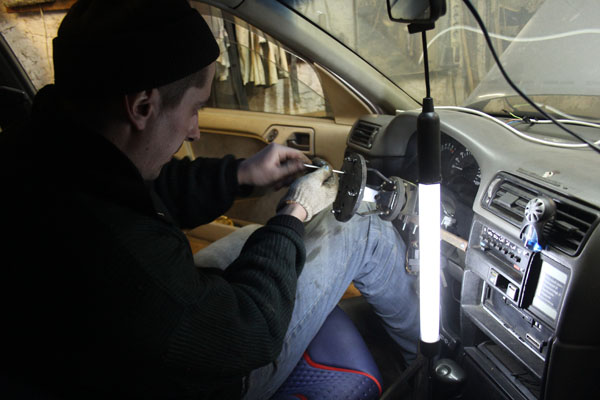 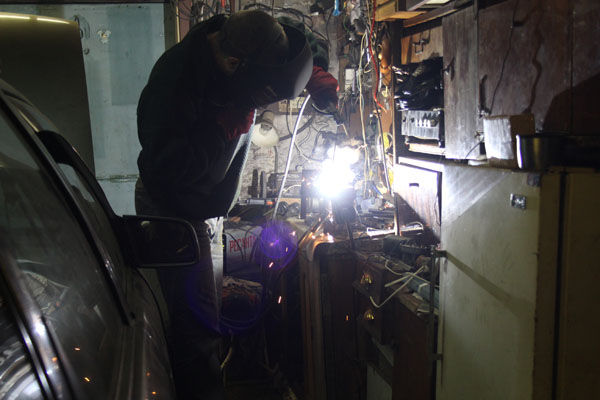 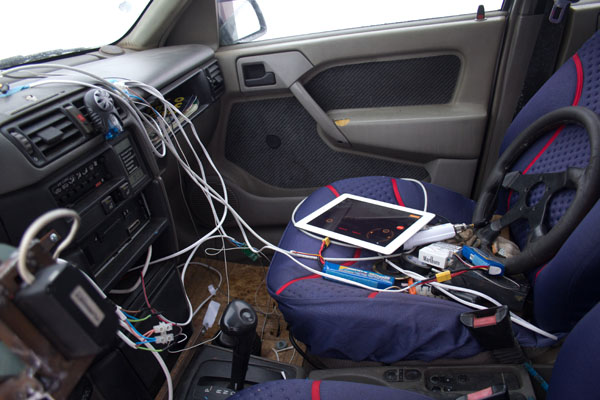 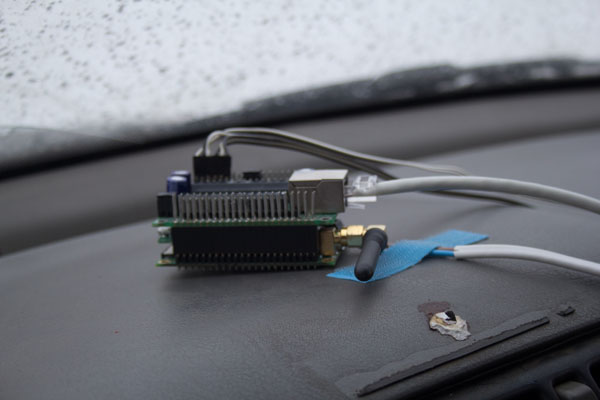 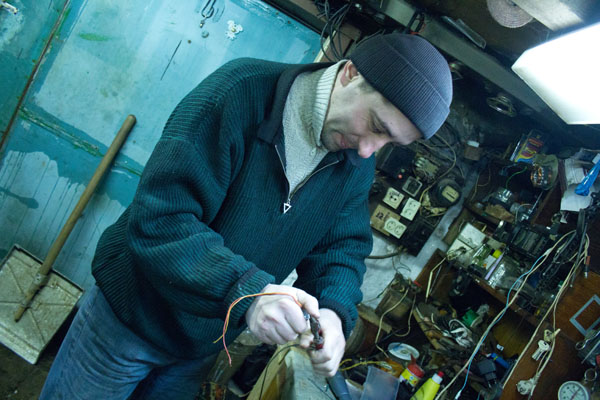 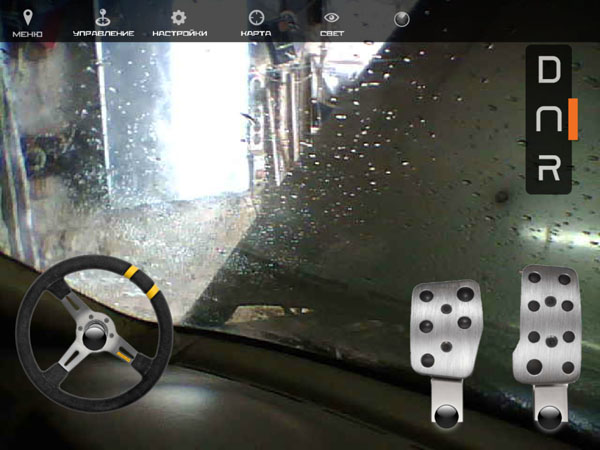 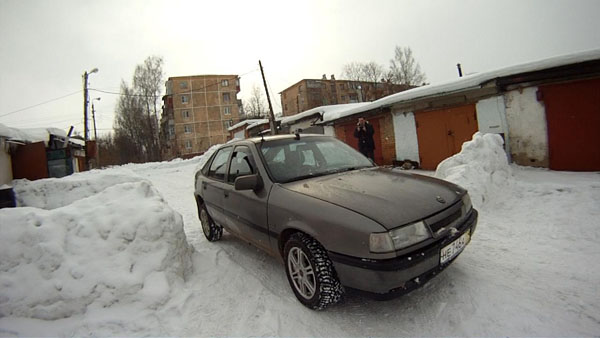 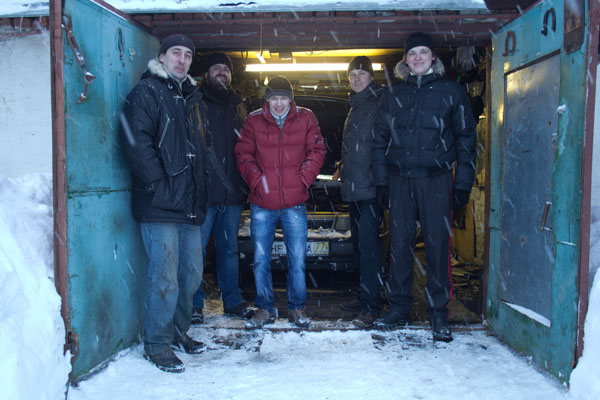 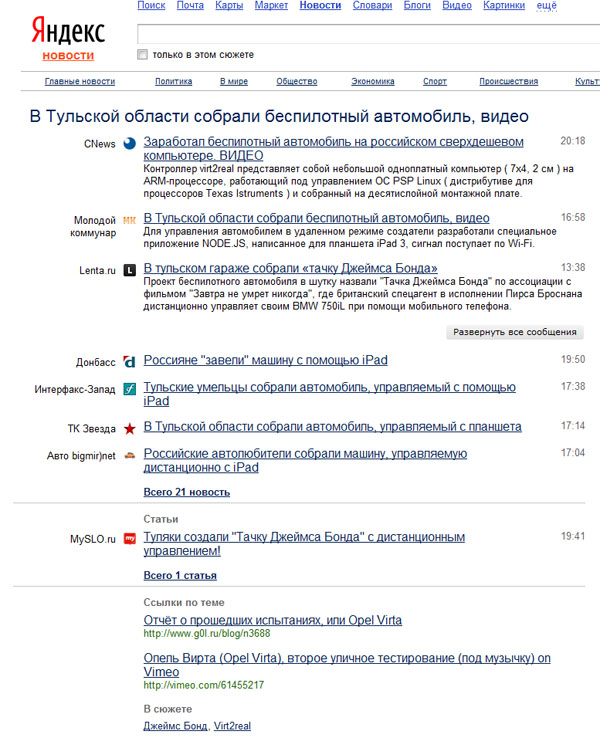 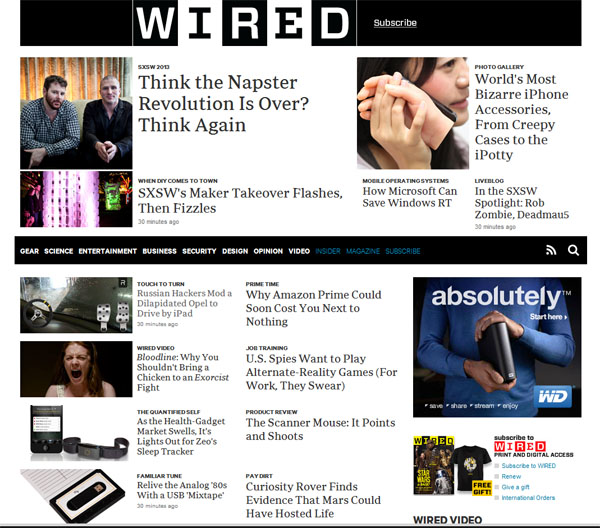 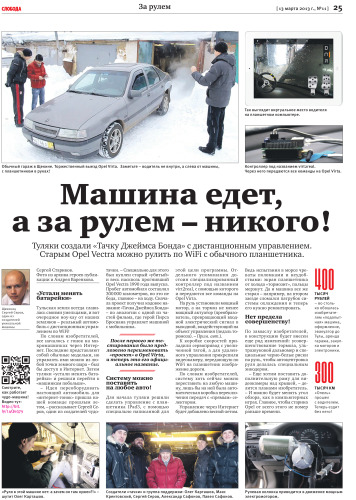